At 12:51 pm on the 22nd February, the people of Christchurch will be reminded of a day they will never forget; the day in 2011 when a devastating earthquake killed 181 people and changed forever, the lives of thousands of others.

Today, as many people begin rebuilding damaged or condemned properties in the eastern suburbs, curious sightseers aboard double-decker buses traversing this once bustling CBD are confronted by yawning empty spaces and water-filled basements where once hotels, office blocks, shops, and churches once proudly stood.

Opposite the site where the CCTV building had stood and where 115 people died, are 181 empty white chairs, a memorial to the total number of people who lost their lives that day.

Christchurch was the city of my youth. It was there I attended school, appeared in non professional theatre productions and where I began my 30 year career as a radio announcer. But earlier this year, I was confronted by a vastly different and devastatingly changed Christchurch, one that bore little resemblance to the garden city of my childhood. Once, familiar street corners had become confusingly unfamiliar, because the buildings that had identified them had been replaced by $2 an hour parking lots. Pubs and restaurants that once rang to the laughter of Friday night ‘happy hour’ revelers along the famous Oxford Terrace strip, now demolished, barricaded or boarded up – many, a canvass for the city’s graffiti artists.

The cinemas of my youth – simply, gone, with nothing to say they were ever there. The city’s Square, intersected by Worcester and Colombo Streets, once dominated by the iconic Anglican Cathedral with its majestic spire and viewing balconies, now standing broken, forlorn and deserted amongst waist high grass, looking very much like any ancient ruin you’d find in southern England. 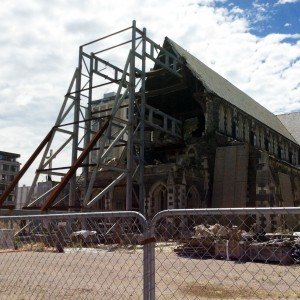 It was while walking down these shattered and for the most part deserted streets, some  barricaded in preparation for the 100 buildings still to be demolished, that I realised I was experiencing a new kind of loss; not the loss of a loved one; a missed opportunity or some material possession, but the loss of what was once so familiar to me, a loss of my past if you like, and in most cases, no recognisable sign that it ever existed.

What most media reports subsequent to that horrific day in September 2011 have failed to reveal are the appalling statistics, for example that in the immediate aftermath of the quake, 30 thousand people were without habitable homes and that 50 thousand no longer had jobs to go to. Also not widely known was a 35% increase in calls to Mental Health telephone services, a 53% jump in the number of reported cases of domestic violence, and an unspecified increase in the number of suicides.

Like the proverbial phoenix, Christchurch City, populated by a very resilient and positive people will eventually rise from the ashes of 2/11, but never to be forgotten are those who lost family, friends, jobs, homes, and marriages, and tragically in some cases, the sheer will to go on.

Father’s day is a day to celebrate the Dads, father figures and mentors in our lives. For anyone grieving, separated from or missing their Dad though it can be a very challenging time. The...

Christmas is a wonderful occasion...but equally it can be a very tough day for many in the community. To everyone who is so very much looking forward to Christmas, I wish you a wonderful d...

If you have experienced loss the whole festive season can be extremely challenging.   Time and time again people have said to us they wish they could go to bed at the end of November and wake...